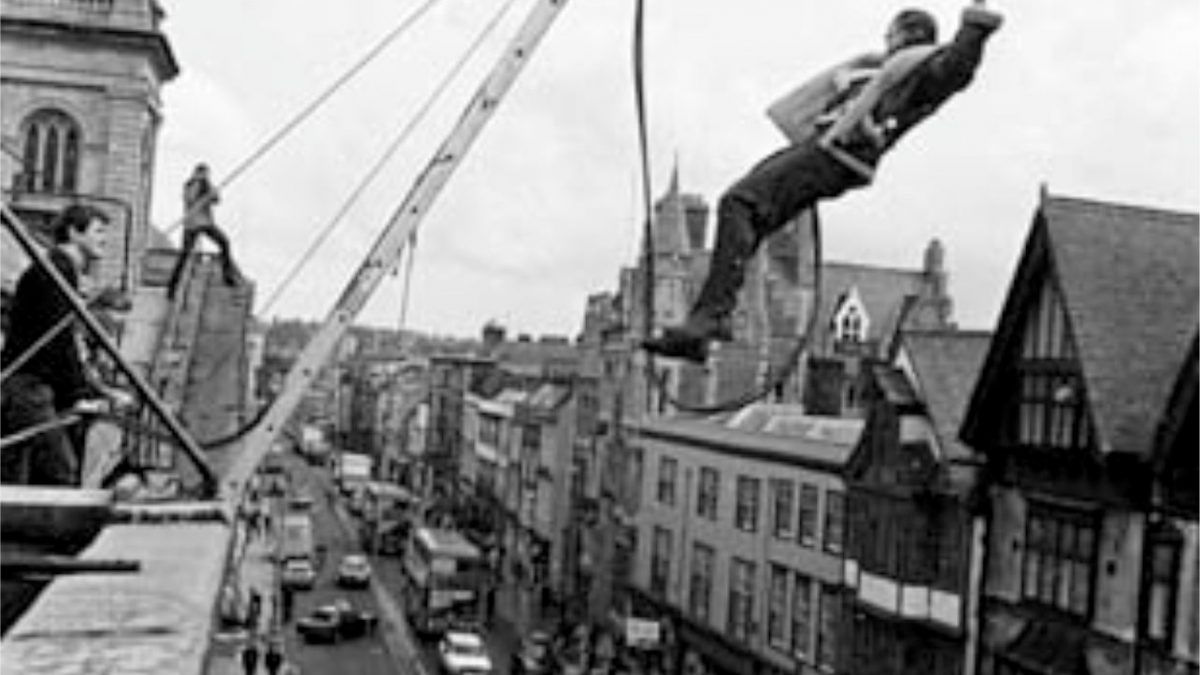 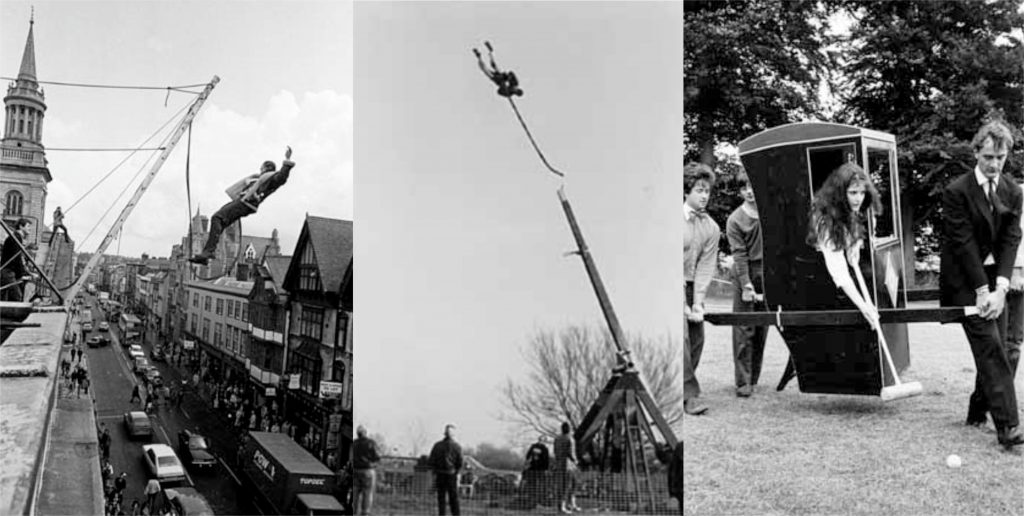 (All photographs by Dafydd Jones)

The Oxford University Dangerous Sports Club was founded in the mid-70s by David Kirke, Chris Baker, Ed Hulton and Alan Weston as little more than a group of undergraduates hungry for excitement, for the unusual and for extreme experiences. The eclectic group, which included several members of the upper class, well-educated and affluent, but also members from England’s middle and working class, met exclusively to have some very silly and eccentric fun, but in the process they became pioneers of sports like bungee jumping, BASE jumping and hang gliding; more or less inventing the world of what is known today as alternative sports. Their mischieveous activities, which very frequently involved risking their lives, combined imagination, courage, innocence and blind recklessness. They seemed willing to engage in any activity simply if it had never been done before.

Apart from enjoying fine food, wine, and literature, the members of the club were also addicted to danger. They adopted a peculiar protocol of formal attire and abundant champagne in their outings and activities. These included riding down very steep hills in shopping carts (20 years before Jackass even existed), running with the bulls at Pamplona while riding skateboards and carrying umbrellas. They sailed a modified septic tank across the English Channel once, and later they also crossed it in the pouch of an inflatable kangaroo. They organized a bike race down the Matterhorn mountain in the Alps, which naturally required parachutes for the cyclists.

This race led to other surreal ski races, normally in Saint-Moritz. The “vehicles”, many almost suicidal machines, ranged from an ironing board to a baby carriage, from a grand piano to a Louis XIV dining set, all equipped with skis. A truly Fellinian spectacle. Most rides ended in spectacular crashes of course. They even tried to send a London double-decker bus down the mountain once, which was not allowed by authorities. The bus had been purchased in London and driven all the way to Saint-Moritz, picking people up along the way.

The club was always about much more than mere adrenaline and excitement. It was political, adventurous, philosophical and artistic at the same time, and, in a very sophisticated way, radical. One of the more insane activities carried out by the club was a cocktail party held on an extremely small, uninhabited, remote rocky islet in the North Atlantic Ocean, more than 300 miles off the coast of Scotland. The event invitations requested black-tie. They sailed for five days through horrible weather, narrowly avoided sinking by plugging a leak in the hull with a champagne cork, somehow climbed the 70-foot rocky cliffs, and spent the night drinking champagne and dancing to the Beach Boys, before returning home. 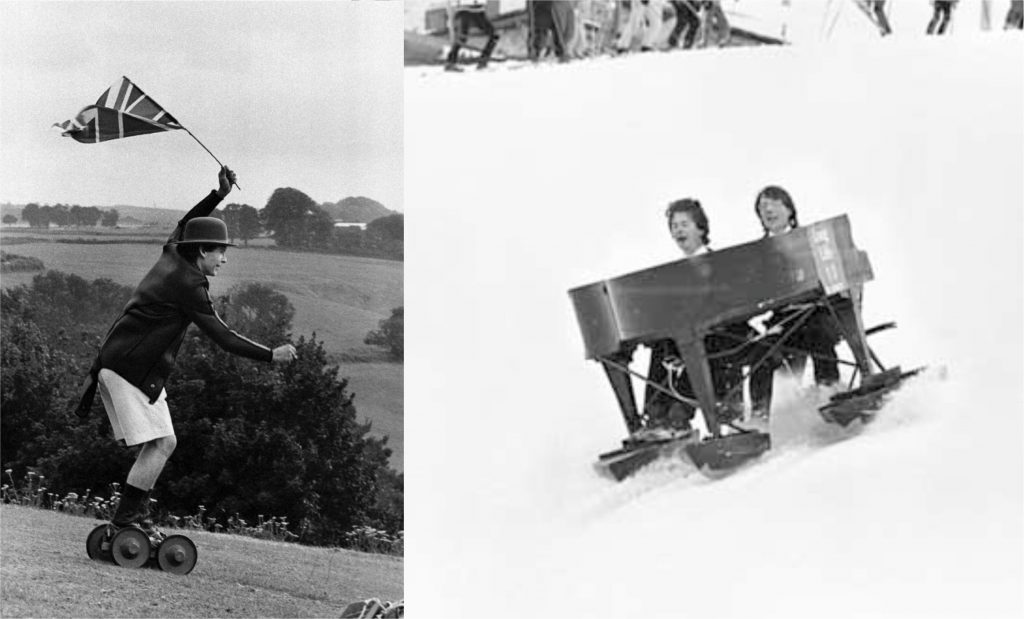 (All photographs by Dafydd Jones)

Although the group was never oficially recognized by Oxford as a university group, for some years the existence of the club was tolerated, until its activities became way too dangerous and they were thrown out.

In the early 90’s the members of the club met another eccentric Englishman who had built an enormous trebuchet on his Shropshire estate. He was flinging old cars, dead cows, and burning pianos into an empty field. After visiting several times, the bold Oxonians convinced the man to build them a machine to shoot humans. In medieval times, during sieges, dead, decomposing corpses of cows were sometimes thrown into walled villages, to spread diseases. However, no one had never seriously considered the idea of throwing other men. It was the perfect challenge for the Dangerous Sports Club.

At twenty-six feet tall, the medieval catapult they built was imposing structure. The machine violently hurled people several stories high and into a net 100 feet away. This activity became popular, and not only with members of the club. Soon they were even charging people for money for launching them to the sky. One November morning in 2002 tragedy struck. An enthusiastic 19-year-old freshman biochemistry student was killed when he missed the net by a few inches. He crashed into the ground and lived only a few hours.

The club had betrayed their own rules. They had now started marketing thrills to the public. MTV and other companies had already started sponsoring some of their events. The gentlemen adventurers had broken their fundamental principles of doing everything themselves, harming only themselves and doing things just for the fun of it. The catapult incident was the most serious one, but not the only accident.

It is not certain when the Oxford Dangerous Sports Club disappeared, but this witty group of eccentric men (and a few women) did gradually dissolve. They left an incredible legacy, though. Bungee jumping, BASE jumping, and to an extent hang gliding, owe their existence and popularity to them. Many followed in their footsteps and created profitable franchises and businesses of alternative or extreme sports. However, such a snobbish and sophisticated combination of elitist quest for pure pleasure, hedonist surrealism, absolute disregard for the norm and spirit of adventure is impossible to replicate. Never again will there be an Oxford Dangerous Sports Club. Unique and inimitable, like Monty Python, like James Bond (perhaps a blend of both) it is already a true British classic.

There is an excellent article on Oxford’s Dangerous Sports Club in Vanity Fair (2013).

And for some real good fun, here’s a cool documentary (in two parts):