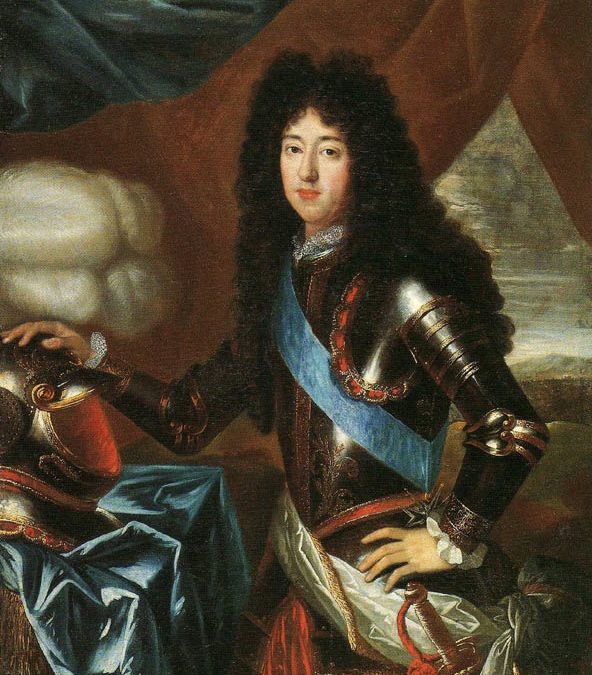 Philippe I, Duc d’Orléans (1640-1701) known in court as Monsieur, was the younger brother of Louis XIV. A victim of history, Monsieur was from a very early age encouraged by his mother, Anne of Austria, to dress as a girl, wear ribbons, perfumes and ear pendants. She would call him “my little girl”. As a young man, Philippe would always be surrounded by women, would dress up and attend balls and parties in female attire or dressed as a shepherdess, a habit he would have all his life.

Anne and Cardinal Mazarin, regent of France and Chief Minister, who co-ruled France after Louis XIII died and until Louis XIV came of age, were absolutely determined to avoid a repetition of the bloody civil war of the Fronde, in which family members fought each other. On two occasions Louis XIII’s younger brother, Gaston, Duke of Orléans, had to leave France for conspiring against the King’s government.

Monsieur was perverted so that he would have no aspirations to the throne and pose no threat to his elder brother. Although for 18 years he was direct heir to the throne of France, he was never groomed to succeed Louis. He was never permitted to participate in government in any way, he was never given an official position, and he was kept financially dependent on the Crown. Although he did get the Palais Royal, the palais of Saint Cloud, had many titles and even his own Swiss guard, his behaviour was closely watched by his mother and Mazarin. His education was focused on languages, history, literature, mathematics and dancing.

Despite preferring men, he married twice and even had a mistress. And even though he was profoundly femenine, he could, however, sucessfully lead an army into battle. He participated in the War of Devolution, in 1667, distinguishing himself by his courage and coolness under fire, although he could sometimes get bored of the battlefield and become more interested in the decoration of his tent. He also fought in the siege of Lille, and took part in the sieges of Flanders and was promoted to the rank of Lieutenant general, second in command only to the Sun King himself. He commanded 44,000 men in his victory at the Battle of Cassell in 1677, against William III, Prince of Orange.

A brave commander, he would go into battle wearing high heels, bejewelled and extravagantly clothed in lace and silk, with a long, perfumed wig. According to one of his wives, Philippe’s biggest fear when going into battle was not bullets, but the possibility of looking a mess. He avoided gunpowder and didn’t wear a hat, to avoid ruining his hair. Of him, Voltaire said, many years later, “courage is not incompatible with effeminacy”. When Louis learnt of Philippe’s growing popularity in court and the battlefield, he became jealous and moved quickly to terminate his brother’s military career.

Philippe immersed himself in a life of earthly pleasures. After the Battle of Cassel he dedicated his time to the expansion of his estates, personal fortune, and art collection. He renovated his residences. At his estate of Saint Cloud, he hired André Le Nôtre -who was his brother’s principal gardener at Versailles- to redesign his gardens and Jules Hardouin-Mansart to construct a basin and a new canal in 1698.

He was a passionate gambler, party-giver and gossip. He loved to discuss clothes and jewels and questions of etiquette with women. Despite his open homosexuality, it is ironic that Philippe would in time become a true patriarch. Through the children of both of his marriages (to Princess Henrietta of England and later, Elizabeth Charlotte), who reproduced and spread throughout Europe, he became an ancestor of most modern-day Roman Catholic royals, which earned him the nickname “the grandfather of Europe”. Louis XIV´s progeny, on the other hand, of died out with the Revolution.

He was the founder of the House of Orléans, a cadet branch of the ruling House of Bourbon. Philippe not only enjoyed architecture and the social aspect of the court, but was a keen on music and was often noted for his exceptional dancing abilities. Philippe was a keen supporter of architects along with painters and was a patron of Molière as well as other musicians such as Anglebert, Dumont, Arlaud and Marie Aubry. He was also a good father and a shrewd businessman.