Hungry for the Real Thing

Intellectual property rights enforcement is considered today crucial to sustaining economic growth across all industries around the world. Some economists estimate that up to two thirds of the value of large businesses in the US can be traced to intangible assets. Intellectual property protection stimulates innovation, the thinking goes. Creators will not have sufficient incentive to invent unless they are entitled to obtain value from their inventions.

The origin of the concept of intellectual property goes some time back, the legal term is pretty recent. We can find the first traces in Jewish Law but the notion of intellectual creations as property did not appear until the 16th century. Patents evolved from royal prerogative -Queen Elizabeth I gave royal grants for monopoly privileges- to the legal right of any inventor to have exclusive control over the production and sale of his invention. In section 1 of the French Law of 1791 it says that all new discoveries are the property of the author. The author is granted a patent for five, ten or fifteen years. It was not until the 19th century, however, when the term intellectual property began to be used, and it has not been common worldwide until the end of the 20th. Although there are some unresolved ethical issues with intellectual property, especially when it comes to life-saving medicines or genetically modified seed that are given intellectual property protection, in general terms intellectual property is considered absolutely fundamental for trade and development.

One of the most flagrant cases of breach of intellectual property was discovered by a blogger in China this year. 5 fake Apple stores that sold authentic -but unauthorized- Apple products. So realistic were the stores that even the employees thought they worked for Apple. Chinese entrepreneurs are not only copying products now, they are appropriating successful retail concepts, replicating the look and feel of stores and in effect pirating the whole brand experience, the most valuable asset for many companies.

11 Furniture, a Chinese furniture retailer in the city of Kinming, has taken this practice a little further still. They have created a 10,000-square-meter, four-story replica of an IKEA store. Not a full copy, because they have not actually used the IKEA logo, but nearly everything else, including the blue-and-yellow color scheme, the mock-up rooms, the rocking chair design, the cafeteria, and even the miniature pencils. The name in Chinese “Shi Yi Jia Ju” also sounds like the official IKEA Chinese name “Yi Jia Jia Ju”.

China is feared because it seems to be out to conquer the world, but at the same time it is obvious that Chinese are fascinated and seduced by western brands and culture. Let’s not forget that Rome conquered Greece, but it became Greek in doing so. Roman elite spoke and wrote Greek as fluently as Latin. Greek philosophy, religion, science, art and thought permeated into every aspect of Roman life. Horace once said “Graecia capta ferum victorim cepit et artis intulit agresti Latio” (“Conquered Greece has conquered the brute victor and brought her arts into rustic Latium”).

The future doesn’t just appear, it has to be invented. To invent you need the drive, the money, both of which China definitely has, and of course the imagination. Imagination is fuelled by learning, and the best way to learn is to copy. However, one thing is to copy products, labeling, stores, or uniforms. Copying the ideals, values or aspirations is not that easy. 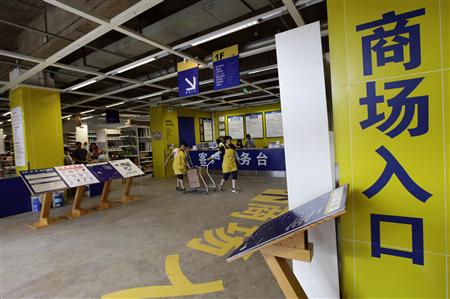 China does have real IKEA stores, especially in the wealthier coastal and southern cities, in Beijing and Shanghai. So if you want the real deal, you can have it, but you would need to have your purchase shipped. Why the hassle when you can have 11 Furniture? IKEA has said wisely that the best thing to prevent such stores from opening in the future is to open more stores and make IKEA products available to more people. So in the end, maybe having fake stores isn’t that bad after all. 11 Furniture and the fake Apple stores did breach intellectual property rights but they also brought free publicity for Apple and IKEA. They also showed there is demand for their products. If anything, they simply paved the way for the American and Swedish brands, giving customers just a taste and creating anticipation for the real thing.

(To read the original article, published in Nov 2011, in PDF: Hungry for the Real Thing)